This Is What Could Pop the Bitcoin Bubble

This Is What Could Pop the Bitcoin Bubble

You are here: Home / cryptocurrency / This Is What Could Pop the Bitcoin Bubble

Bitcoin and bubble have become virtually synonymous in the minds of many skeptics during this year’s breathtaking rally. While the digital currency has defied doomsday prophesies, there’s a number of ways this party could end badly for the swelling ranks of bulls. 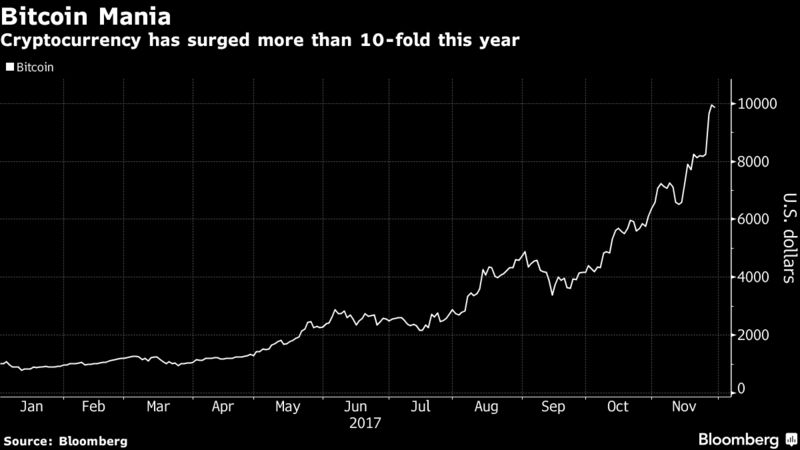 But be warned: many of the potential causes of death have surfaced during the past few years, and have proven unable to bludgeon bitcoin into oblivion thus far.

Knifed by a Fork

The multiple offshoots of bitcoin could cause the world’s largest digital currency by market value to cede its crown.

Divides among developers as to how to proceed with upgrades to bitcoin’s network have led to "forks," in which different versions of the currency are spun off from the original. Excessive fragmentation could prove a bug for bitcoin, just as it did for the U.S. financial system during the free banking era. When it comes to cryptocurrencies, hedge fund manager Mike Novogratz warned, "not everything can win" — though that’s not enough to stop him from launching a $500 million fund to invest in the asset class.

Ether, the second-largest digital currency, has posted massive gains since the bitcoin forks began. But even that advance pales in comparison to the surges in bitcoin and bitcoin cash over the same span.

Given bitcoin’s checkered history as the means to purchase illicit materials, a vehicle for capital flight, and a victim of theft, it’s no surprise that regulators around the world have cast a watchful eye over the asset class. As such, the specter of a complete crackdown on cryptocurrencies remains an ever-present tail risk. The SEC has been keeping an eye on crypto and has given guidance saying some tokens may be securities, making them subject to their oversight.

UBS Group AG Chief Investment Officer Mark Haefele said the wealth manager wouldn’t dedicate funds to bitcoin because "all it would take would be one terrorist incident in the U.S. funded by bitcoin for the U.S. regulator to much more seriously step in and take action."

That raises the prospect of bitcoin becoming a casualty of its own success should cryptocurrencies gain sufficient mainstream adoption and pose a threat to the government’s ability to collect taxes or the efficacy of monetary policy. Even so, the recent history on restrictions is not encouraging for bitcoin bears: the digital currency was able to shake off what was tantamount to an attempted ban by Chinese authorities in September.

Ever since the 2011 breach of the Mt. Gox exchange, bitcoin owners have had to face the possibility that this intangible asset may fall into the hands of hackers. The Tokyo-based exchange filed for bankruptcy February 2014, alleging there was a high possibility that what was then nearly half a billion in bitcoin had been stolen.

The 2011 breach and 2014 collapse of Mt. Gox were accompanied by steep declines in bitcoin, as was the $65 million theft of the digital currency from Hong Kong exchange Bitfinex in 2016.

But a $31 million hack of alternative currency tether earlier this month was only a speed bump for bitcoin. After falling more than 5 percent, the cryptocurrency recovered to post a fresh record high the same session.

At present, most options investors have for shorting cryptocurrencies are fairly expensive and risky. With futures from reputable, established exchanges in play, more investors may be incented to enter into positions that put downwards pressure on prices.

The introduction of bitcoin futures could also ultimately prove detrimental to its valuation should clearing organizations come under stress amid the digital currency’s wild swings.

Thomas Peterffy, chairman of Interactive Brokers Group Inc., argued in an open letter that allowing bitcoin futures on platforms that clear other derivatives would raise the risk of price gyrations that could "destabilize the clearing organization itself."

Any institutional credibility recently gained by bitcoin could evaporate should such the cryptocurrency’s fluctuations serve to disrupt and undermine the operations of financial markets.

Pass Away on Profit-Taking

The failure of major cryptocurrency exchanges such as Coinbase to handle traffic on the day bitcoin breached $11,000 throws into sharp focus the scalability problems that cryptocurrencies face as speculative vehicles.

"A bitcoin correction is now likely and human psychology suggests it will finish the day lower," wrote Bloomberg macro strategist Mark Cudmore. "If this was a normal market, it would almost definitely retrace in the short-term because large barrier magnets had been taken out."

Profit-taking opportunities when the cryptocurrency passes significant milestones could foster steep declines and waves of selling pressure due to poor liquidity.

It’s been a puzzle to explain why bitcoin’s gone parabolic. Why would we expect the way down to be any different?

The practical applications for cryptocurrencies to facilitate legal commerce appear hampered by relatively expensive transaction fees and the high energy costs associated with mining at this juncture. On this note, Nobel Prize-winning economist Joseph Stiglitz said that bitcoin "ought to be outlawed" because "it doesn’t serve any socially useful function."

Former Fed Chairman Alan Greenspan has said that "you have to really stretch your imagination to infer what the intrinsic value of bitcoin is," calling the cryptocurrency a "bubble."

Perhaps it could end like the dot-com bubble — with investors who have no clue how to value high-flying assets fleeing for the exit en masse.