Whatever you might say about HTC (and believe me, there’s plenty to say), at least the company takes some fascinating chance. As newly minted CEO Yves Maitre admitted to me at Disrupt a couple of weeks back, the once mighty smartphone giant has lost the thread in recent years. But if nothing else, the Exodus project marks a glimpse at some potential smartphone future.

With this weekend’s launch of the Exodus 1s at Berlin’s Lightning conference, HTC aims to make it clear that the project is more than just a one-off. The new device lowers the barrier of entry to €219 (~$244). All said, not a bad price for those looking to dabble in the technology. Oh, and obviously it’s available in all of the various equivalent cryptocurrencies. 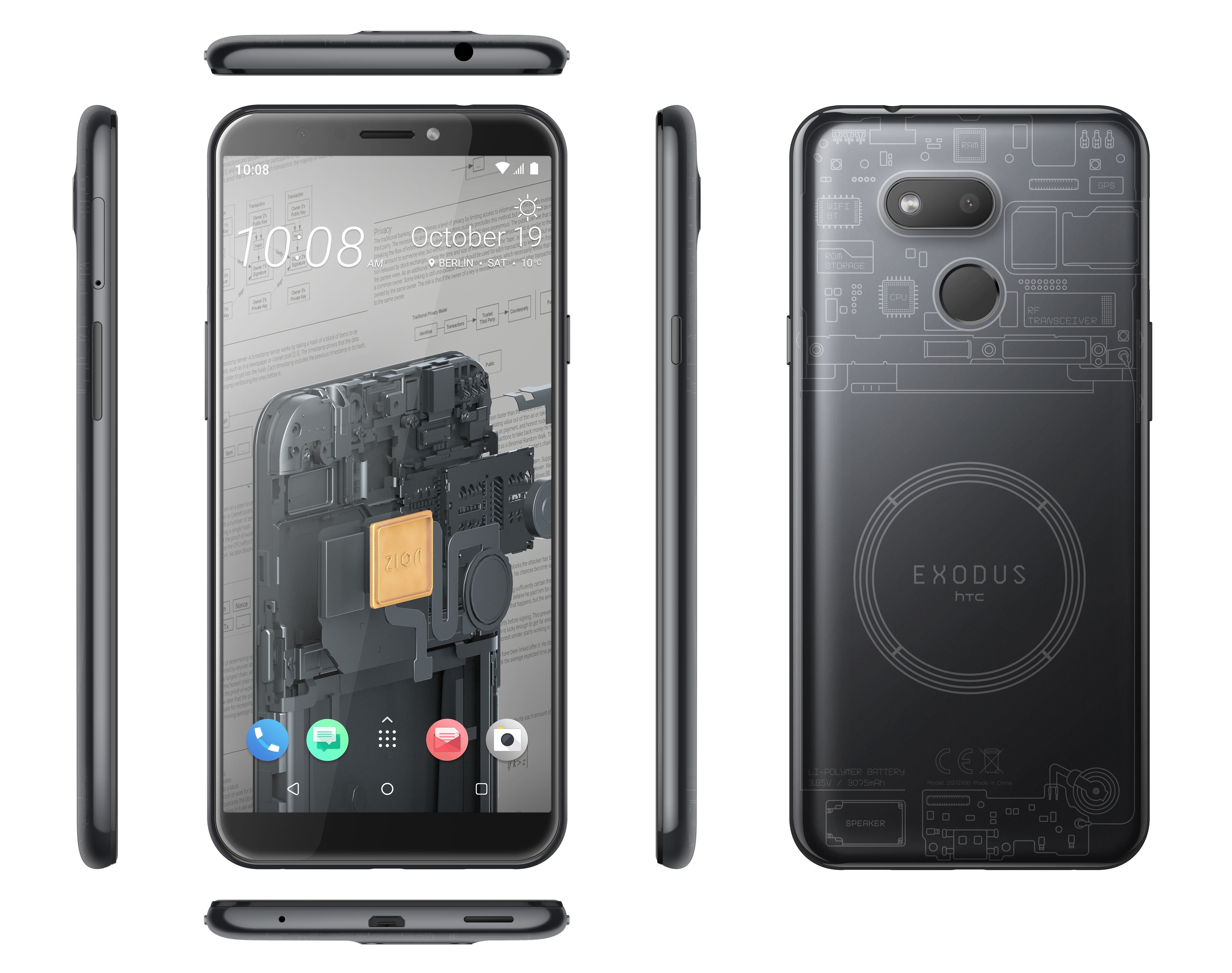 The specs are fittingly pretty dismal. There’s a Snapdragon 435, running Android 8.1. The screen is a 5.7 inch HD+, coupled with a decent 4GB of RAM and 64GB of storage. Oh, and there’s a microUSB port and, good news, a headphone jack. Honestly, it’s a pretty low-end device, all told.

The big difference here being the the inclusion of a hardware wallet and Bitcoin node access. “We gave users the ability to own their own keys, and now we’ve gone one step further to allow users to run their own full Bitcoin node,” HTC’s Phil Chen said in a release tied to the news. “We are providing the tools for access to universal basic finance; the tools to have a metaphorical Swiss bank in your pocket.” 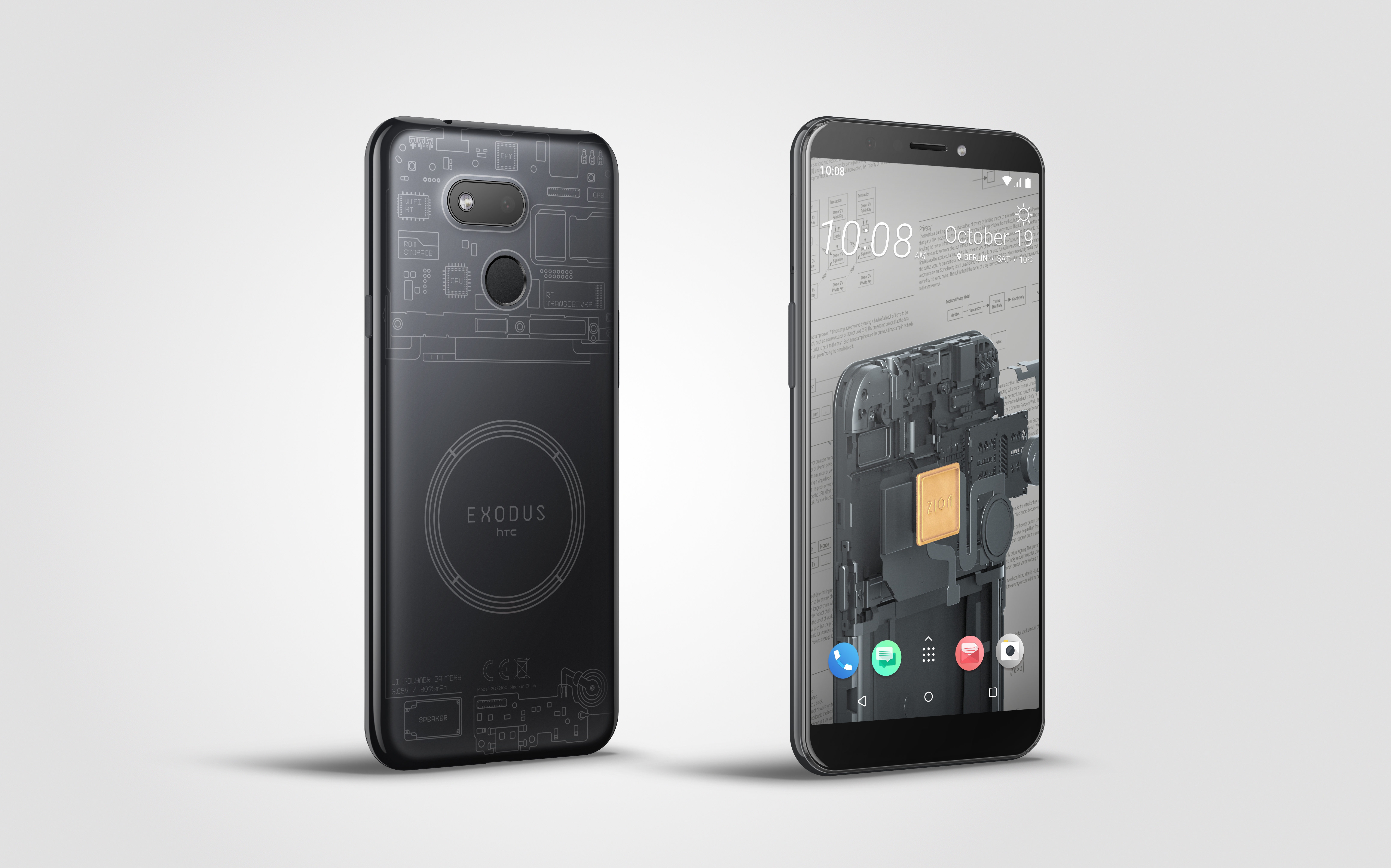 Maitre told me the other week he still believes mainstream use of blockchain on these devices is more than two or three years out. What the 1s provides, however, is an inexpensive way to see what the technology provides today. Interested parties in Europe, Taiwan, Saudi Arabia and the UAE can order it online starting today.

On September 17, HTC announced that cofounder Cher Wang would be stepping down as CEO. In her place, Yves Maitre stepped into the role of Chief Executive, after more than a decade at French telecom giant, Orange.

It’s a tough job at an even tougher time. The move comes on the tail of five consecutive quarterly losses and major layoffs, including a quarter of the company’s staff, which were let go in July of last year.

It’s a far fall for a company that comprised roughly 11 percent of global smartphone sales, some eight years ago. These days, HTC is routinely relegated to the “other” column when these figures are published.

All of this is not to say that the company doesn’t have some interesting irons in the fire. With Vive, HTC has demonstrated its ability to offer a cutting edge VR platform, while Exodus has tapped into an interest in exploring the use of blockchain technologies for mobile devices.

Of course, neither of these examples show any sign of displacing HTC’s once-booming mobile device sales. And this January’s $1.1 billion sale of a significant portion of its hardware division to Google has left many wondering whether it has much gas left in the mobile tank.

With Wang initially scheduled to appear on stage at Disrupt this week, the company ultimately opted to have Maitre sit in on the panel instead. In preparation for the conversation, we sat down with the executive to discuss his new role and future of the struggling Taiwanese hardware company.

5G, XR and the future of the HTC brand

Earlier this month, HTC co-founder Cher Wang stepped down from her role as CEO. In her place, former Orange EVP Yves Maitre has taken up the reins for the Taipei-based smartphone maker.

One of Maitre’s first acts as the head of HTC will be to join us at Disrupt in October. The interview — and his new role — comes at a tenuous time for HTC. The company has been harder hit than most by several years of stagnant smartphone sales.

In spite of a $1.1 billion deal in 2017 that gave Google access to most of the Taiwanese company’s R&D resources, the following year still saw massive layoffs. All the while, it has looked to emerging technologies like VR and blockchain as a potential way forward in an oversaturated market. In his first public interview, Maitre will discuss how HTC got here and what the company can and will do to help turn the ship around.

Happy Blockchain Week to you and yours. HTC helped kick off this important national holiday by announcing the upcoming release of the HTC Exodus 1s. The latest version of the company’s intriguing blockchain phone shaves some of price off the Exodus 1 — which eventually sold for $699 when the company made it available in more traditional currency.

HTC’s being predictably cagey about exact pricing here, instead simply calling it “a more value-oriented version” of the original. Nor is the company discussing the actions it’s taking to reduce the cost here — though I’d expect much of them to be similar to those undergone by Google for the Pixel 3a, which was built by the former HTC team. There, most of the hits were to processing power and building material. Certainly the delightfully gimmicky transparent rear was a nice touch on the Exodus 1.

Most interesting here is the motivation behind the price drop. Here’s HTC in the press release:

It will allow users in emerging economies, or those wanting to dip their toes into the crypto world for the first time, easier access to the technology with a more accessible price point. This will democratize access to crypto and blockchain technology and help its global proliferation and adoption. HTC will release further details on exact specification and cost over the coming months.

A grandiose vision, obviously, but I think there’s something to be said for the idea. Access to some blockchain technology is somewhat price-prohibitive. Even so. Many experts in the space agree that blockchain will be an important foundation for microtransactions going forward. The Exodus 1 wasn’t exactly a smash from the look of things, but this could be an interesting first step.

Another interesting bit in all of this is the opening of the SDK for Zion Vault, the Trusted Execution Environment (TEE) product vault the company introduced with the Exodus 1. HTC will be tossing it up on GitHub for developers. “We understand it takes a community to ensure strength and security,” the company says, “so it’s important to the Exodus team that our community has the best tools available to them.”

There’s no doubt about it: “Blockchain” is the biggest tech buzzword of today, the equivalent of “web 2.0” at its heyday a decade ago, and naturally, everyone wants in.

The latest company to join the blockchain party is HTC, who has announced the HTC Exodus, a smartphone that fully embraces blockchain technology.

Blockchain is a crucial technology that underlies Bitcoin. It’s a decentralized, cryptographically secured database that’s near-impossible to tamper with, which makes it great for securely storing financial transactions data. But after Ethereum expanded on Bitcoin’s original idea, letting anyone run fully fledged apps on the blockchain, we’ve seen everyone jump on the bandwagon, from photography companies to burger chains.

So is HTC just riding the hype without much substance? Not necessarily.

On a teaser website, HTC says the phone will be “dedicated to decentralized applications and security.” The company lists several ways in which the Exodus phone will do this: For example, it will support decentralized applications (Dapps) and it will have a hardware element that will connect to cryptocurrency wallets. Both of these are doable: There’s already a phone called Sikur that focuses on security and has a built-in cryptocurrency wallet, and Sirin labs has announced its cryptocurrency-oriented Finney phone in May.

HTC also claims that every Exodus phone will be a node — a vital part of Bitcoin and Ethereum’s architecture, which broadcasts messages across the network. “We want to double and triple the number of nodes of Ethereum and Bitcoin,” HTC’s site says. The idea is interesting, but running a node eats up processing power, storage and bandwidth. It’s already possible to run a Bitcoin or an Ethereum node on a smartphone, but optimizing this for the mass market is not trivial.

There’s no word on the phone’s specs, though things like camera performance would likely be secondary to the phone’s utility as a blockchain-friendly device.

For this project, HTC has assembled a team led by Phil Chen, who was one of the architects behind the Barnes & Noble Nook, as well as a long-time product manager at HTC.

There’s no word on the price, either, but you can already reserve the phone by giving up your email, here.