Not content with a previous warning investors should brace for U.S. yields of 4 percent, Jamie Dimon went one further at the weekend, suggesting 5 percent was a distinct possibility.

The JPMorgan Chase & Co. chief executive officer said Saturday people should be prepared to deal with the benchmark 10-year bond yield at 5 percent or higher.

“I think rates should be 4 percent today,” Dimon said Saturday at the Aspen Institute’s 25th Annual Summer Celebration Gala. “You better be prepared to deal with rates 5 percent or higher – it’s a higher probability than most people think.” 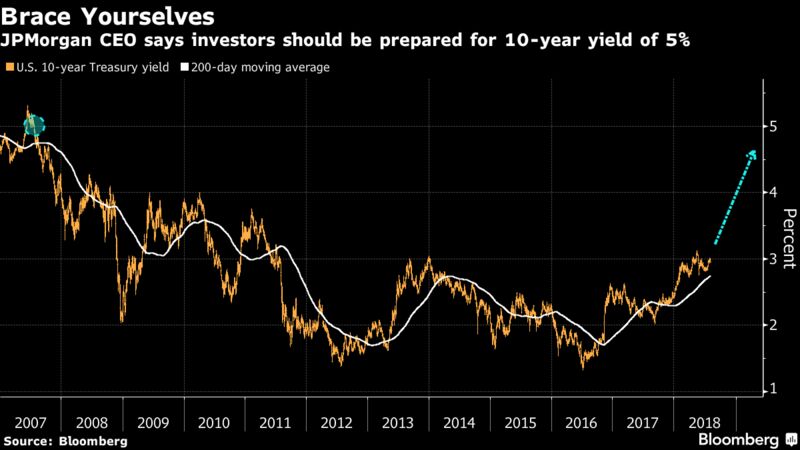 The 3 percent level is still providing stiff resistance for the 10-year Treasury yield this year. It briefly rose through the mark last week before falling back for the fourth time this year. That’s despite a U.S. jobless rate below 4 percent, economic growth above 4 percent, and a rare surge in late-cycle government borrowing.

The current bull market could “actually go for 2 or 3 more years” because the economy is still doing quite well and markets usually turn right before the economy, Dimon said.

Cyber attacks are “probably the biggest risk” to the U.S. today, though banks are quite well protected, Dimon said.

The JPMorgan CEO reiterated comments made last year on Bitcoin, calling cryptocurrencies a “scam” and saying he had “no interest” in the world’s largest digital currency. He suggested governments may move to shut down the currencies, because of an inability to control them.

Dimon had urged investors to prepare for higher rates in an interview in May, given the possibility growth and inflation could prove fast enough to prompt the Federal Reserve to raise interest rates more than anticipated, and the increase in financing by the U.S. Treasury.