The tumble in cryptocurrencies that erased nearly $500 billion of market value over the past month could get a lot worse, according to Goldman Sachs Group Inc.’s global head of investment research.

Most digital currencies are unlikely to survive in their current form, and investors should prepare for coins to lose all their value as they’re replaced by a small set of future competitors, Goldman’s Steve Strongin said in a report dated Feb. 5. While he didn’t posit a timeframe for losses in existing coins, he said recent price swings indicated a bubble and that the tendency for different tokens to move in lockstep wasn’t rational for a “few-winners-take-most” market.

“The high correlation between the different cryptocurrencies worries me,” Strongin said. “Because of the lack of intrinsic value, the currencies that don’t survive will most likely trade to zero.” 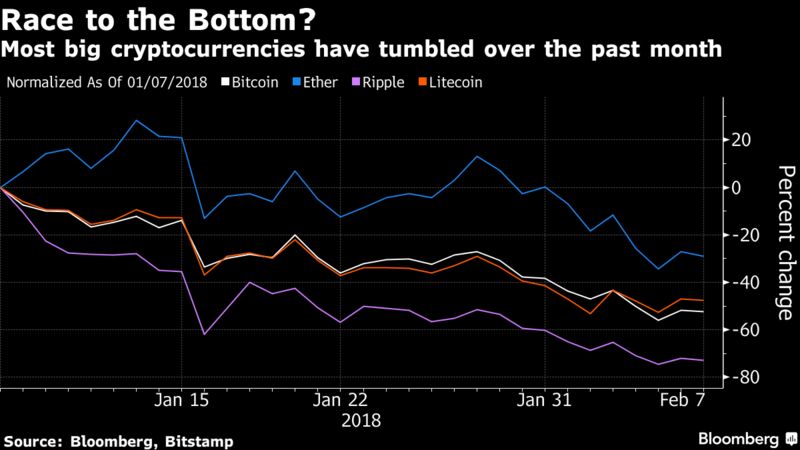 Today’s digital coins lack long-term staying power because of slow transaction times, security challenges and high maintenance costs, according to Strongin. He said the introduction of regulated Bitcoin futures hasn’t addressed those concerns and he dismissed the idea of a first-mover advantage — noting that few of Internet bubble’s high fliers survived after the late 1990s.

“Are any of today’s cryptocurrencies going to be an Amazon or a Google, or will they end up like many of the now-defunct search engines? Just because we are in a speculative bubble does not mean current prices can’t increase for a handful of survivors,” Strongin said. “At the same time, it probably does mean that most, if not all, will never see their recent peaks again.”

Strongin was more upbeat about the blockchain technology that underlies digital currencies, saying it could help improve financial ledgers. But even there he sounded a note of caution, arguing that current technology doesn’t yet offer the speed required for market transactions.

Hong Kong-based Binance.com is adding “a couple of million” registered users every week, with 240,000 people signing up in just an hour on Wednesday, Chief Executive Officer Zhao Changpeng said in an interview with Bloomberg Television. Demand is so high that the company is limiting new customers, he said, though Binance may fully reopen in the coming weeks.

“We did not expect this kind of growth to be honest,” Zhao said from Tokyo on Thursday.

Binance was the world’s most active crypto exchange over the past 24 hours, according to Coinmarketcap.com, hosting $6 billion worth of digital currency trades. The most popular asset was Tron, which accounted for 11 percent of volume.

Zhao said his average customer was male and aged 25-35, though Binance is “beginning to get a lot of interest from institutional investors.” 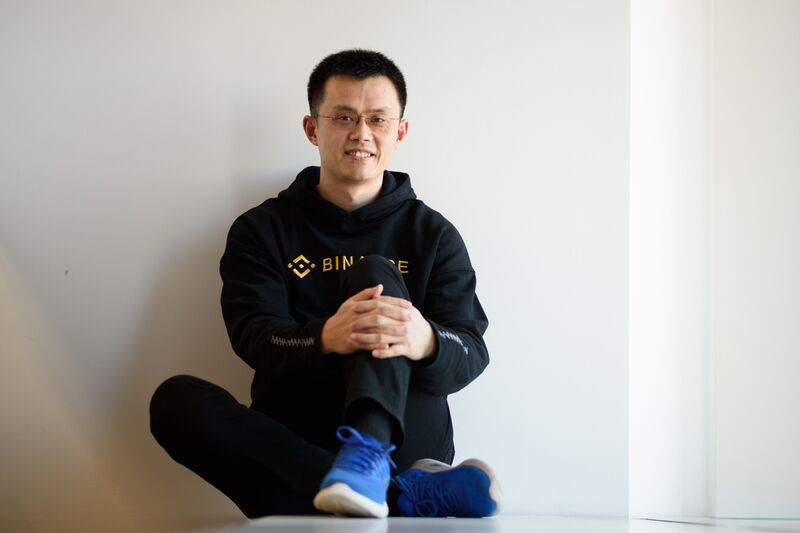 Professional money has largely shunned the frenzy accompanying cryptocurrencies, with Warren Buffett becoming the latest name from the world of high finance to voice doubts, saying on Wednesday that “they will come to a bad ending.”

Zhao said he was unfazed by the comments.

“Warren Buffett is a guy I truly respect from an investment point of view,” he said. “But I do not think he understands cryptocurrencies at all. It is what it is. I still respect him in other parts of his expertise. But I think on cryptocurrencies he’s making a big mistake.”

Traffic on Binance has been so high that the company hits the limit of servers per account permitted by its cloud provider Amazon.com Inc. “every day,” Zhao said. Amazon Web Services is the world’s biggest provider of cloud computing services, powering large companies such as Netflix Inc.

“We have a guy whose full-time job is just requesting servers,” he said. “Every day they say, ‘OK, here are 200 more,’ but we just ask for more.”

Representatives from Amazon didn’t immediately reply to a request for comment.

Zhao also said that his company is working to receive an exchange license from Japan’s Financial Services Agency. The country passed comprehensive cryptocurrency regulation that included oversight of exchanges in April, and has issued 16 licenses to date.

“Japan is the most progressive country in the world in terms of regulations,” he said.

Former Silicon Valley developers are working on at least two new versions of the digital currency. Basecoin is seeking to solve bitcoin’s volatility with a team of former Google Inc. coders that are building what they hope will be a more stable version of the cryptocurrency. Cypherium has former Google, Amazon Inc. and Microsoft Corp. developers building a blockchain that aims to be able to handle an expanded workload more easily. 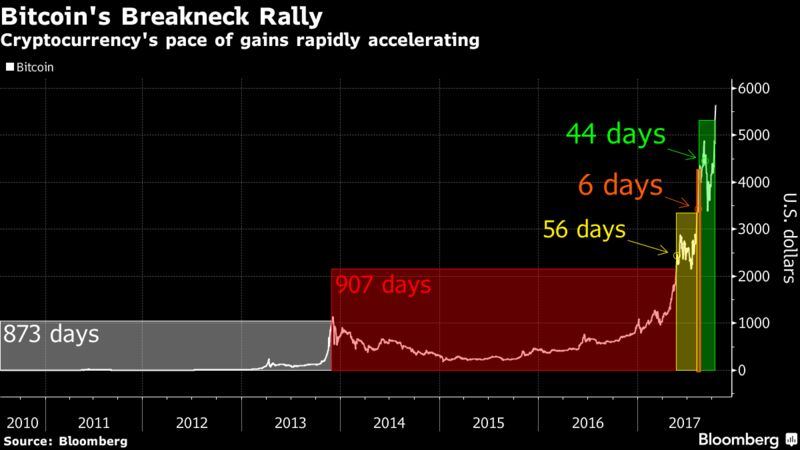 Competition isn’t new for bitcoin as there are over 1,000 different blockchains, the technology used for verifying and recording transactions that’s at the heart of bitcoin. While many rivals such as ethereum also provide applications, others like zCash and monero already say they’re trying to improve upon the first and biggest cryptocurrency.

So far they haven’t succeeded in dethroning bitcoin. After briefly dipping below 50 percent of the total cryptocurrency market, bitcoin is back at its dominant position.

“When you have a whole new industry, competitors within that industry aren’t really competing with each other, they’re competing with the old industry and generally all boats rise together,” said Peter Van Valkenburgh, research director at Coin Center.

Basecoin’s investors include venture-capital firms Andreessen Horowitz, PolyChain Capital, Pantera Capital and Mark Cuban-backed 1confirmation, among others. The team aims to develop a central bank that’s based on algorithms, performing similar money supply regulation functions done by the Federal Reserve, except it’s on the blockchain, requiring no human discretion. The hope is to have a stable currency that will make commerce more viable than can be conducted given bitcoin’s wild price swings.

In the Cypherium blockchain, developers write smart contracts and do governance work off-chain, so that all the power can be dedicated to transactions. The aim is for the cryptocurrency to handle thousands of transactions per second, compared with bitcoin’s fewer than 10.

Newcomers will have a lot of catching up to do, as bitcoin continues to break new records, now towering above $5,000, as it shrugs off splits on its blockchain that stem from disagreements on fixing the very problems these new cryptocurrencies say they solve.

Want your company’s stock to climb? Consider mentioning “bitcoin” in the press release.

In the late 90s all it took was a dot-com in the name, back in the 60s “tronics” was good enough to double a share price. In 2017, the moniker sure to stoke investors’ appetite is any variation of “digital currency.”

Take Overstock.com Inc., which added about $137 million in market cap Wednesday after announcing the launch of a Securities and Exchange Commission-compliant digital tokens exchange. Thursday’s example: Goldmoney Inc. rose 15 percent after saying it will offer its clients the ability to trade bitcoin and ether and store the assets in auditable and insured vaults.

Betting that cryptocurrencies will ultimately revolutionize the world just as electronics and the internet did, investors are now casting a wide net to try to find the next Amazon.com — with perhaps not enough scrutiny to avoid this era’s Pets.com. For investors who find bitcoin or ether too risky, an alternative is buying shares of publicly-traded companies tied to the sector, said Lisa Ellis, an analyst at Sanford C. Bernstein & Co.

“It’s like betting on the picks and shovels in the middle of a gold rush,” Ellis said in an interview. “It’s a safe and still lucrative area, which is why people get excited about firms doing things like exchanges and vaults. They’re enablers, solving the weak links in the cryptocurrency system.”

Overstock and Goldmoney are examples of companies trying to take cryptocurrencies to the mainstream by building an infrastructure around the sector that allows institutional investors to buy the assets with all the safeguards and protections of trading stocks and bonds. That plan depends on cryptocurrencies maturing enough to become their own asset class, even as eminences of the financial world such as JPMorgan Chase & Co.’s Jamie Dimon and hedge fund billionaire Ray Dalio rail against it.

And it’s not just those two stocks. In June, Nvidia Corp. and Advanced Micro Devices Inc., which make hardware used in cryptocurrency mining, rallied as ether surged near $400 and bitcoin was near a record.

While there’s an argument to be made that the bets these companies are making are risky, they represent the more tame examples within the wider universe of crypto-endeavors. Take the Wu-Tang Coin, the digital token that’s raising money with the sole purpose of buying and releasing the Wu-Tang Clan album that convicted fraudster Martin Shkreli once spent $2 million on. Or Lydian, the blockchain-based marketing platform, backed by socialite Paris Hilton.

Roy Sebag, chief executive officer and co-founder of Goldmoney, doesn’t want his company and others like Overstock to be put in the same group as some of the startups doing initial coin offerings.

“There’s definitely euphoria, but it’s not the same as the ICOs, where people write a business plan over beers and publish it without following any regulations — that’s where you get the Pets.coms,” Sebag said in an interview. “What the finance community wants to see is legitimate companies, with cash and revenue, going into the crypto space, and it’s rewarding them with higher valuations.”

At least for now.