You are here: Home / digital currency / Nine ways to stitch America back together 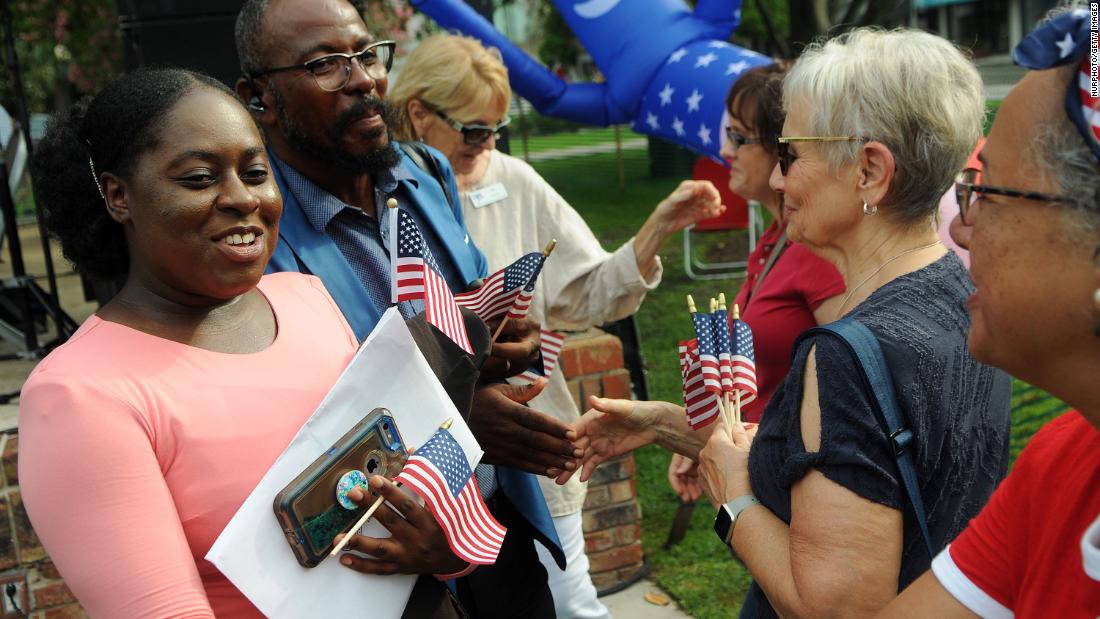 (CNN)There is a slow-motion car crash quality to the destruction of democratic norms right now. But we can’t afford to simply fixate on our problems. We need to focus on finding solutions.

The good news is that there is a growing awareness that we cannot take our democracy for granted. This is a time to straighten our civic backbones and roll up our sleeves. But healing our nation’s divisions will require more than the corrective of one election. Polarization is deeper than our politics: It has roots in economic and cultural divides that have frayed our sense of national unity and decreased trust between fellow citizens. 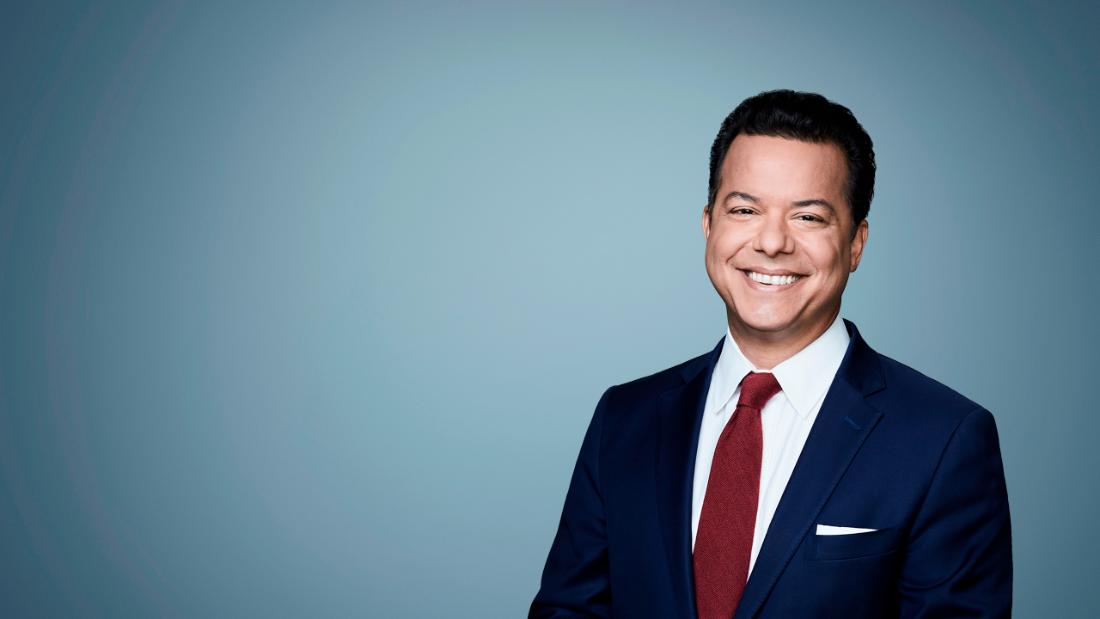 To fix this, we’ll need to build a citizens’ movement based on something bigger than partisan politics or ideology. It will require policy prescriptions that move our country away from the forces that divide us — group think and group blame — and toward the forces that unite us, in the intertwined areas of politics, economics and culture.
So, here are nine big ideas (and a few smaller ones) that can help reunite the nation and combat the larger forces of polarization.

Politics is, of course, the primary expression of our polarization. But, as I’ve said before, President Donald Trump is a symptom rather than the cause of our divisions. We’re reaping what we’ve sown over decades — a twisted incentive system that has pushed our parties toward the ideological extremes, making them less functional and less representative of the nation as a whole.
If I had to pick one package of prescriptions to heal hyper-partisanship in America, it would be a bundle of these three elections reforms: 1) independent redistricting reform, combined with 2) open primaries and 3) ranked choice voting — ideas that incentivize the politics of addition rather than division.
Let’s start with redistricting reform to correct the rigged system where the party draws district lines to create a maximum number of safe seats.
Even Chief Justice John Roberts admitted that “excessive partisanship in districting leads to results that reasonably seem unjust,” despite penning a disastrous Supreme Court decision that blocked a federal path to ending the system of redistricting in a party line vote. 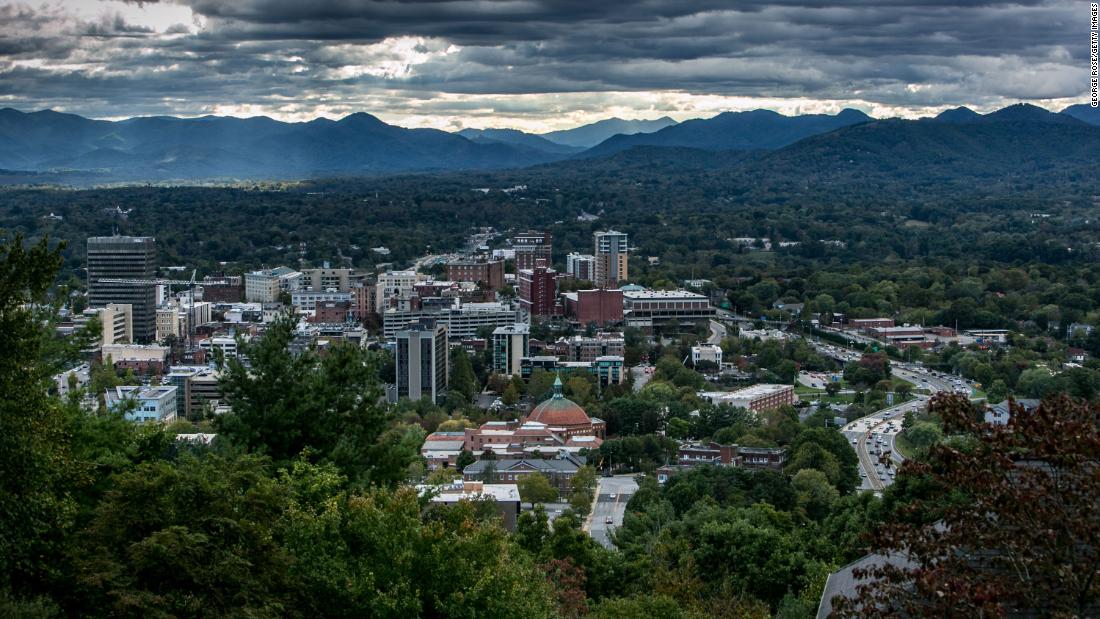 But state remedies are still available and, after the 2020 election, we will have a once-in-a-decade opportunity to reform redistricting in America. Independent nonpartisan redistricting commissions, combined with open primaries where independents can vote, make elections more competitive and representative, and drive increased turnout. This also gives candidates an incentive to reach out beyond their party’s base during campaigns and when they reach Congress.
Ranked choice voting, where voters rank their top choices on the ballot, has recently won support in states like Maine and cities such as New York. It is proving its ability to increase turnout, while providing candidates with a powerful disincentive for “going negative” against opponents.
Those reforms would help create a more open and representative political process. But they’re not enough. We also need to lower obstacles to voter participation, including automatic voter registration. We need to strengthen voting rights and ballot security, including paper ballot backups in a time when data manipulation is a danger.
A more representative and less polarized election process will result in a more representative and less-polarized Congress. And it will change the political bench for statewide and national office, incentivizing bipartisan legislation at every level of government.
If we can change the rules, we can change the game.

There is political, as well as economic ballast in a strong middle class. And that is what defined America in the middle of the 20th century.
But, for decades, the middle class has been squeezed with stagnant wages and lower social mobility. Small businesses have suffered while once proud and thriving Midwest cities have stagnated and declined, leading to huge disparities in regional economies. At the same time, the top one-hundredth of 1% has saw its share of wealth more than quintuple from 1978 to 2012 — and it has only increased since then.
The answer is not to attack liberal capitalist democracy, which has proven to be the most effective means of lifting people out of poverty. But we should reform the rules of the road to ensure that rising tides truly lift all boats.
We need to simplify the tax code while closing lobbyist-driven loopholes and incentivizing long-term investment. Corporations should be guided by long-term value creation, rather than driven solely by quarterly earnings reports, as a group of nearly 200 CEOs agreed in a policy proposed by the Business Roundtable.
We also need to offer more support for lower and middle-income families with children and middle-class workers. One way to achieve this is widespread profit sharing, encouraging companies to share a percentage of profit with workers. This would align the interests of labor and management, creating a win-win mindset while boosting stagnant wages. And this is not a new idea — it dates back to George Washington and can have bipartisan appeal.
The concentration of capital in a small number of communities is also fueling our divides. In response, Steve Case’s “Rise of the Rest” fund is seeding investment in entrepreneurs in America’s heartland — rather than a handful of coastal communities. 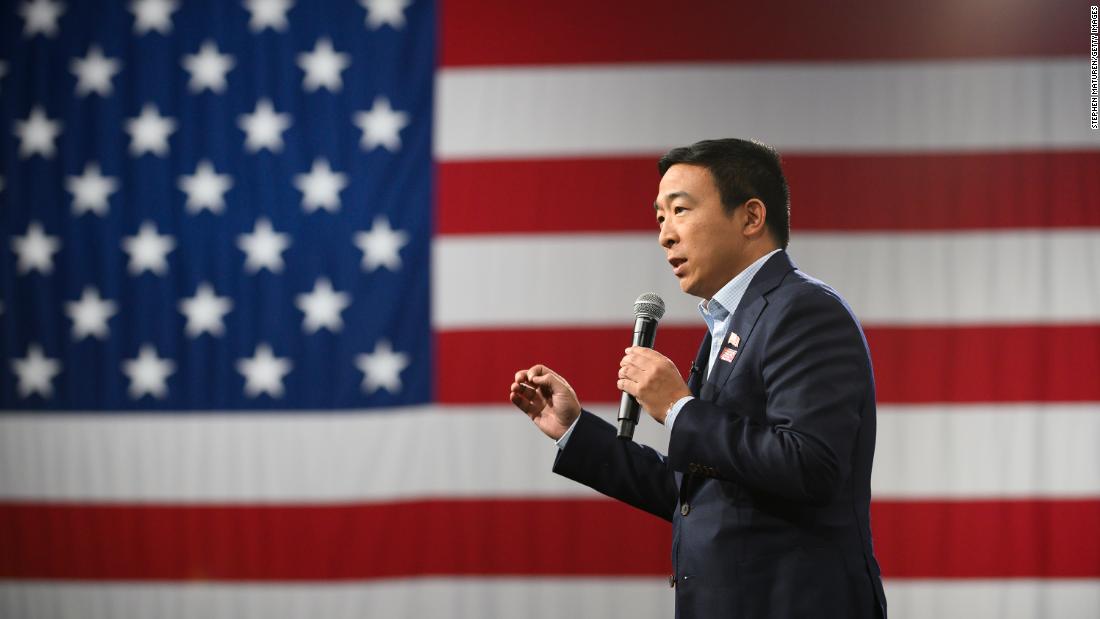 Andrew Yang’s presidential campaign has done us all a service by raising awareness of the looming impact of artificial intelligence on the American workforce. As low-skill jobs are increasingly automatized, we’ll need a new commitment to lifelong learning, from apprenticeships to subsidies for worker retraining, while incentivizing more investment in research and development to keep America innovating.
The demands of an aging population, the challenge of climate change, the rise of China and the need for a stronger social safety net are likely to require a government somewhat bigger than we’ve had in the recent past. But we should not buy into the idea that we can endlessly spend money and pass the cost on to the next generation.
History is clear: Excessive debt is a force that topples empires. We need to return to an abandoned path of fiscal responsibility — with incentives that seek to grow America’s economic pie rather than simply redistribute it.

Democracy depends on an assumption of goodwill between fellow citizens and a shared commitment to the truth. But trust has been declining across every aspect of our culture for decades.
At a time when seven in 10 Americans say that our country is in danger of losing its national identity, we need to turn to reassert a common understanding of our shared history, warts and all, by reinvesting in civic education again.
Less than a quarter of students in 2014 scored “proficient” or better on a basic civics and American history exam, according to the National Assessment of Educational Progress. Investing in civics education should be an area of bipartisan agreement, spurred at first by philanthropy through organizations like Generation Citizen and Gilder Lehrman Institute of American History.
American history should be taught through all twelve grades. Students should also be taught the civic virtues that maintain a healthy democracy, including the importance of both diversity and free speech, rather than promoting the illusion that there are any “safe spaces” in life outside of early childhood.
Civil disagreement is essential to democracy. Finally, it’s not too much to ask that every graduating high school student be able to pass the same citizenship exam that new immigrants now take.
To restore a sense of common purpose across class and racial lines, we may also need to revisit a norm of national service. In addition to military service, expanding AmeriCorps, Peace Corps, even the National Park Service, can play a critical role in increasing the quality of education at home and abroad, improve infrastructure and even mitigate climate change. In exchange for this period of national service, an expanded new G.I. bill can make college education and vocational training more affordable without saddling students with crippling debt. 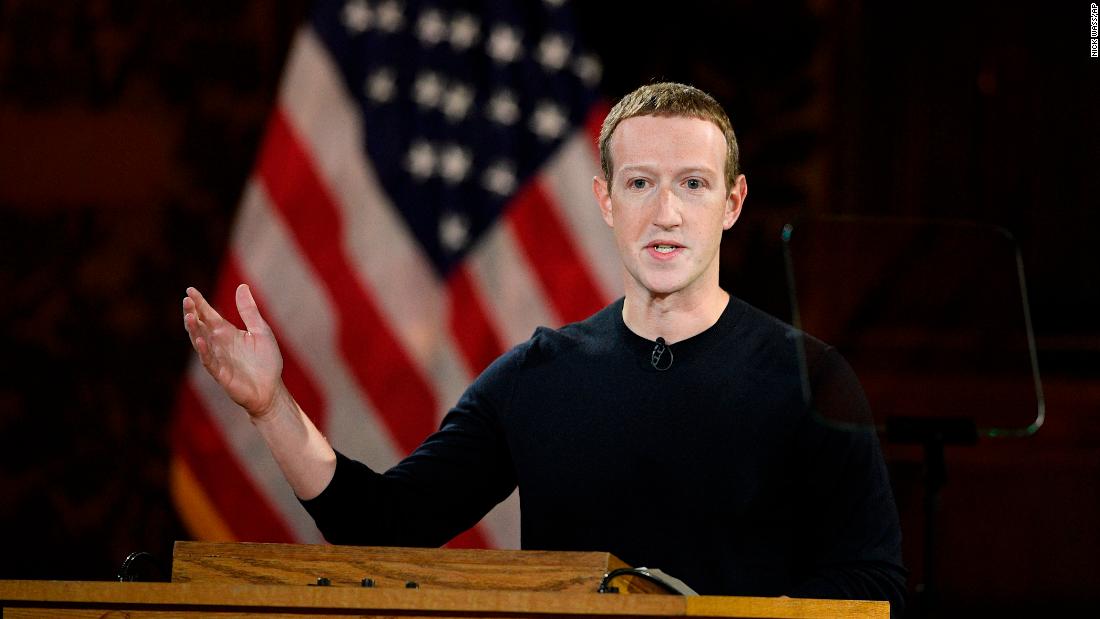 Any prescription to heal America’s polarization would be hopelessly outdated if we did not address the impact of social media on our democracy. Social media and tech platforms have a responsibility not to run knowingly false advertisements or promote intentionally false stories.
They must disclose who is paying for digital political ads and crack down on the spread of disinformation — while we strengthen prohibitions against foreign actors trying to influence our democracy. The Honest Ads Act would require the same disclosures that are required on television and radio right now. This is a no brainer.
The profit motive from hate news and fake news might be reduced by moving digital advertising toward attention metrics to measure and monetize reader engagement and loyalty, incentivizing quality over clickbait.
But perhaps the single biggest reform would come from social media companies requiring that accounts verify they are real people, rather than bots that bully people and manipulate public opinion.

America is living through a civic stress test. Citizens across the political spectrum now realize that “We the People” can no longer take the stability or success of the American experiment for granted.
Restoring American democracy to its fullest form will require building broad new coalitions. As Larry Diamond of the Hoover Institution recently wrote in his book “Ill Winds,” “liberals, conservatives and independents who want politics to be more open and competitive — and less toxic and polarizing — must join together to fight for reforms…a growing number of Americans are ready — indeed hungry — for a renewal of our civic virtues.”
There are currently nearly 100 citizen groups across our country who have responded to our current civic stress test by rallying in their communities and specific areas of expertise. There are think tanks spanning the center-right like the Niskanen Center and the center-left like Third Way. There are nonpartisan groups like Unite America focused on creating a more functional government by enacting political reforms and electing pragmatic candidates.
There are organizations focused on creating bipartisan problem-solving congressional coalitions like No Labels (which I helped co-found a decade ago) and ambitious efforts to build a third party like the Serve America Movement and local efforts in a half dozen states.

There are groups devoting themselves to increasing civility, from Better Angels to the National Institute for Civil Discourse. There are organizations that advocate for election reform like FairVote, the defense of liberal democracy like the Renew Democracy Initiative, and umbrella organizations like the Bridge Alliance that aim to coordinate the efforts of grassroots reform groups across the country.
These are just a few examples of a growing citizens movement to defend our democracy and re-center our republic. There are deep common bonds between these disparate citizen reform groups. All understand our country is in danger of moving even further off-center as the cycle of revenge swings between political activists who demonize people they disagree with.

Going forward, we’ll need to build an alternative architecture to support the vital center across politics, policy and the media. This will provide an off-ramp to the destructive cycle of negative partisanship while counter-acting deeply entrenched partisan and ideological interests that have polarized the United States for too long.
There will be specific reforms to combat corruption that come out the Trump years — the need to strengthen government ethics laws, require the release of presidential tax returns, ramp up enforcement against money-launderers, and even create an independent public integrity protection agency at the federal level.
Confronting the forces that divide us in a time of populist passions is not an elite preoccupation. It is a defense of America’s best and oldest traditions: the belief that we must “join or die,” as Benjamin Franklin warned. This is an all-American movement determined to defend our diverse democracy. It rejects the politics of us against them , understanding that we must transcend our tribalism to survive and thrive, determined to move our country not left or right, but forward.