Goldman Says the Bitcoin Haters Just Dont Get It

Goldman Says the Bitcoin Haters Just Dont Get It

You are here: Home / digital currency / Goldman Says the Bitcoin Haters Just Dont Get It

Bitcoin is a commodity with many similarities to gold, and the volatility that has sparked investor concern stems mainly from its lack of liquidity, said Jeff Currie, global head of commodities research for Goldman Sachs Group Inc.

“I don’t see why there is all this hostility to it,” Currie said in an interview on Bloomberg Television. Bitcoin is “not much different than gold” because it doesn’t have liability attached to it by definition, like a security.

The cryptocurrency topped $11,000 Wednesday, marking an almost 12-fold gain for the year, before retreating later in the day. In comparison, gold has climbed about 12 percent this year. Investors are divided about bitcoin, with the likes of Warren Buffett calling it a “real bubble,” and billionaire venture capitalist Peter Thiel saying critics are underestimating it. Nobel Prize-winning economist Joseph Stiglitz said “bitcoin is successful only because of its potential for circumvention, lack of oversight,” and ought to be outlawed.

Currie said most people who trade bitcoin don’t see the currency as interchangeable with gold, and that there are important differences between the two.

“You look at gold that has $8.3 trillion of gold above ground — that’s real liquidity,” he said. “Central banks control an enormous amount of the supply of gold, which does not make it a complete substitute between bitcoin and gold.” 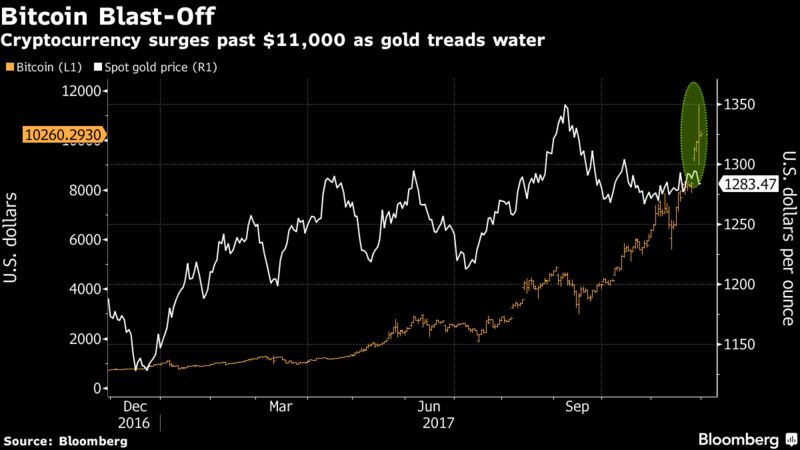 Bitcoin on Wednesday surpassed $11,000 in a matter of hours after hitting the $10,000 milestone as buyers shrugged off increased warnings that the largest digital currency is an asset bubble. The cryptocurrency subsequently fell amid a surge in traffic at online exchanges that led to intermittent outages.

“Lack of liquidity is what’s creating that volatility that has everybody concerned about bitcoin,” Currie said. “Given that level of liquidity and the size of the market in gold, it will never have the same volatility as bitcoin.”