Forget earnings. The smart money is looking to the future 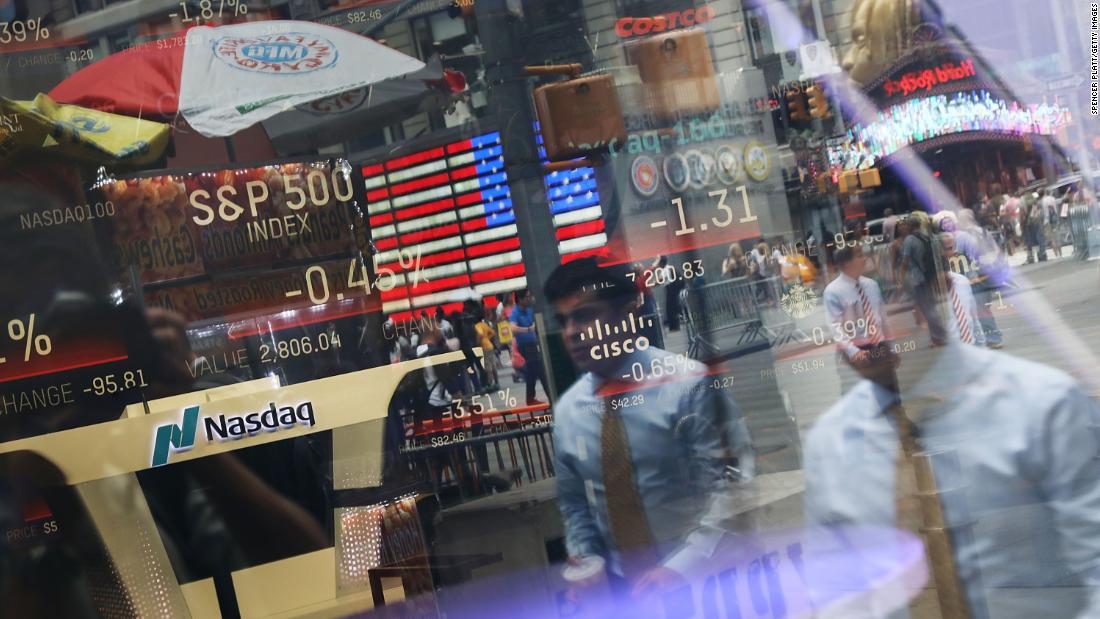 London (CNN Business)1. Earnings angst: Don’t expect the second quarter earnings season to be much of a party.

“The risk is that the company guidance ends up being negative,” said John Normand, head of cross-asset fundamental strategy at JPMorgan Chase (JPM). “It’s not just about the actual earnings.”
Executives have worked hard to manage expectations in advance of their official announcements.
“The way the earnings game is played, the companies guide the analysts low,” said Nick Raich, CEO of The Earnings Scout, a research firm. “Conservative estimates [then] pave the way for an earnings beat.”
Companies have been particularly circumspect this year because of inevitable comparisons to 2018, when gangbuster earnings were padded by US tax cuts.
But the looming slowdown in global growth, made worse by trade tensions, is also forcing businesses to rein in their outlooks.
Daimler (DDAIF), for example, warned of a slump in 2019 profits after recalls, legal issues and weak demand for cars contributed to a rough second quarter.
Others could find themselves in a similar position. Roughly 40% of profits from companies in the S&P 500 are made overseas, according to Raich.
Watching the stock market, you wouldn’t know earnings are poised to be weak. A possible rate cut from the Federal Reserve this month has sent US stocks to record highs, even as tariffs on hundreds of billions of dollars worth of goods from United States and China remain in place.
“The positive impact of lower borrowing costs on profits will outweigh the negative impact of tariffs,” Raich said.
But it’s a precarious equilibrium.
“The status quo is manageable as long as the Fed is easing,” said Normand. “What I’m not so confident about is how much easing it would take to offset yet another hike in tariffs.”
In the immediate term, the biggest concern for markets is insight on what’s next. If guidance is particularly gloomy, stocks could fall 5%, Normand said.
2. Libra hearings: US lawmakers have lots of questions about Facebook’s Libra cryptocurrency. Next week, they’ll get some answers.
Facebook (FB) executive David Marcus, who heads the project, is scheduled to testify before the Senate on Tuesday and the House on Wednesday.
The tech company is pitching Libra as a stable, universally accepted cryptocurrency that will make sending money online easier and promote financial inclusion.
But regulators fear Facebook’s massive reach will prompt a rapid adoption of digital money at a time when the sector is largely unregulated. They also worry about Facebook’s reputation for failing to protect user data.
Facebook says it has met with regulators, and has plans in place to protect user data and prevent financial crimes using Libra. The company has also stressed it won’t be the sole manager of Libra — instead, it will be run by an independent organization.
Democrats on the House committee that will question Marcus have asked Facebook to halt the development of Libra until lawmakers have a chance to consider regulatory action. They may have common ground with President Donald Trump, who last week criticized Libra and said that Facebook would need a license if it wants to act like a bank.
3. Prime Day: Amazon (AMZN) Prime Day will return for the fifth time starting Monday.
This year the discount event will run for two days. Prime Day will feature more than 1 million deals globally, including what Amazon boasts will be the “the biggest deals ever” on Amazon Music, Prime Video and Alexa-enabled devices.
Amazon, which raked in $232 billion in sales last year, does not break out revenue on Prime Day. But global sales this year are expected to hit $5.8 billion, according to Coresight Research. Last year, Amazon generated $3.9 billion, according to the research firm.
“No doubt Amazon Prime Day will be another blockbuster event for Amazon, especially as it has increased the length and it seems to be working even harder with suppliers to secure deals and volume,” said Sucharita Kodali, analyst at Forrester Research.
4. Coming next week:
Monday — China Q2 GDP; Prime Day begins; Citi (C) earnings
Tuesday — US retail sales; Germany’s ZEW economic sentiment index; JPMorgan Chase (JPM), Wells Fargo (WFC), Goldman Sachs (GS), Charles Schwab (SCHW), Johnson & Johnson (JNJ), United Airlines (UAL) earnings
Wednesday — US housing starts and building permits; Eurozone inflation; Bank of America (BAC), eBay (EBAY), IBM (IBM), Netflix (NFLX) earnings; US oil inventories
Thursday — Japan inflation; Morgan Stanley (MS), Philip Morris (PM), Honeywell (HON), Microsoft (MSFT) earnings
Friday — American Express (AXP) and BlackRock (BLK) earnings; University of Michigan consumer sentiment
— Nathaniel Meyersohn and Clare Duffy contributed reporting.