Dont dismiss bankers’ predictions of a bitcoin bubble they should know 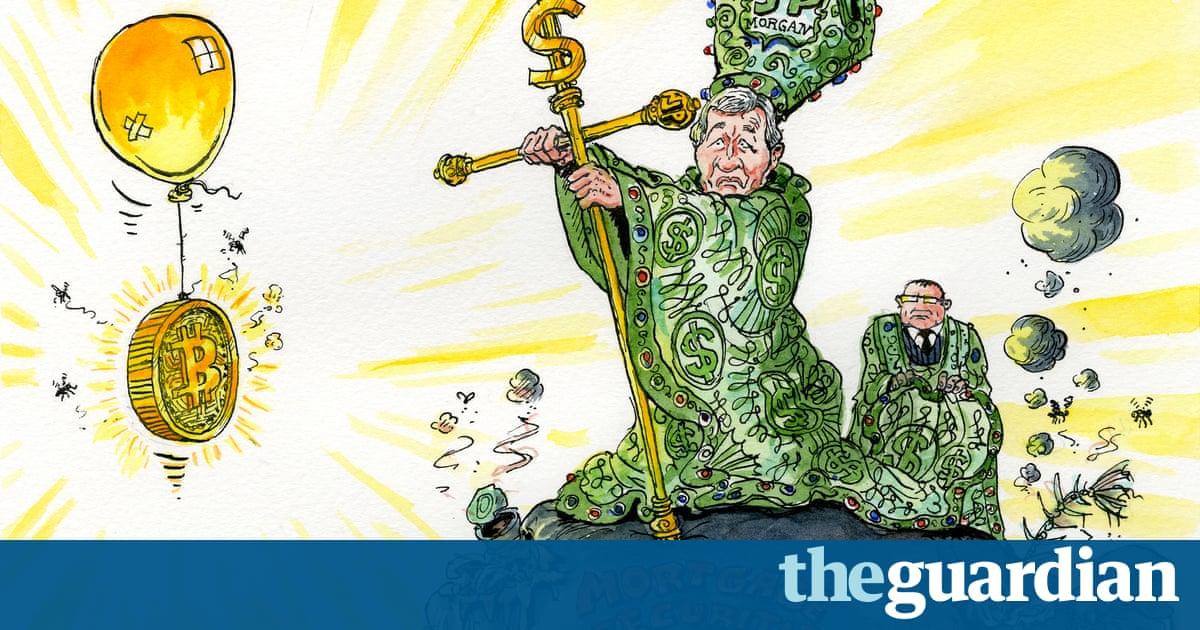 When the boss of Wall Streets biggest bank calls a bubble, the world inevitably sits up and listens, albeit with a sense of historically weighted irony: of course an investment bank boss would spot disaster after his industry presided over the last one. Jamie Dimon, the chief executive of JP Morgan, said last week that the ascendancy of the virtual currency bitcoin which has risen in price from just over $2 in 2011 to more than $4,000 at points this year reminded him of tulip fever in 17th-century Holland. It is worse than tulip bulbs, he said. It could be at $20,000 before this happens, but it will eventually blow up. I am just shocked that anyone cant see it for what it is.

Dimons comments are an open invitation for derision from those who, rightly, point out that although JP Morgan may be top of the Wall Street heap, that heap is far from being the moral high ground. Under Dimons leadership, it has agreed a $13bn settlement with US regulators over selling dodgy mortgage securities the instruments behind the credit crunch and its run-ins with watchdogs include a $264m fine last year for hiring the children of Chinese officials in order to win lucrative business in return.

But it doesnt make him wrong. Even the most basic description of bitcoin an intellectual test on a par with describing a collateralised debt obligation elicits mental images of a digital back-alley shell game. A bitcoin is a cryptographic solution to a complex equation. It is not as recognisable to you or me as a unit of value as, say, a dollar bill or a prize conker. There is no central authority validating the creation of bitcoins instead, they are recorded on a public electronic ledger called a blockchain. If you regard the Bank of England as an all-powerful insurer for the pound, there is no such institution behind bitcoin.

This lack of a central authority is one of the reasons why Dimon cavilled in such strong terms last week. In the interstices of unregulated finance lurk neer-do-wells.

If you were a drug dealer, a murderer, stuff like that, you are better off doing it in bitcoin than US dollars, he said. So there may be a market for that, but it would be a limited market.

Hyperbole aside murderers dont necessarily need a digital wallet to fulfil their ambitions Dimon is referencing a well-trailed link between bitcoin and narcotics. The currency is also vulnerable to hackers. Without a backstop central bank, heist victims stand to lose everything, as with the collapse of the MtGox bitcoin exchange in 2014. Taking out a mortgage denominated in bitcoins is not advisable and, luckily for those stupid enough to try it, you wont find a high street bank willing to underwrite it.

But some of the perceived flaws behind bitcoin that alarm Dimon no central authority, a public ledger of transactions point to the foundations of a new financial establishment. In his jargon-busting lexicon of finance How to Speak Money, the author John Lanchester described how the high priests of ancient Egypt controlled agriculture and by extension the economy through a closely guarded flood measurement system known as a nilometer that was hidden behind a load of mumbo jumbo. Dimon, a modern high priest, faces a rival value system in bitcoin. It has no temple, no central authority and uses a rubric over which he has no control. In other words, it is an alternative financial establishment, whose popularity is inextricably linked with the ebbing of trust in the global system that was triggered by the credit crunch.

If bitcoin fails, or is discredited, another system will rise to take its place, without the imprimatur of Dimon or his peers around the altar.

First-time buyers beware: this rate rise could just be the start

House owners, and would-be house owners, beware. Change is coming. The majority on the Bank of Englands monetary policy committee against raising interest rates seems huge, confirmed at 7-2 last week. But the language is tightening around the nations finances.

Spare capacity in the economy unfilled jobs and unspent money is being whittled away more quickly than previously thought and inflation is still likely to overshoot its 2% target over the next three years. Yes, wage growth is running below an inflation rate that has now hit 2.9%, but all signs now point to that 7-2 split flipping the other way come November.

As the Bank said, some withdrawal of monetary stimulus is likely to be appropriate over the coming months. This was firmed up the following day by Gertjan Vlieghe, previously the most anti-rise MPC member, when he said the bank was approaching the moment for an increase.

Market punters now think there is a 42% chance of a rise in November, and more than 50% in December. The current split on the MPC masks the weighing of trade-offs between economic growth and inflation, post-referendum stability and curbing consumer debt which is ever delicate and close to a tipping point.

A rate rise from 0.25% at present to 0.5% will be no disaster and would merely represent a return to the previous record low, which had lasted from 2009 to the EU vote. But what should sharpen borrowers minds is the thought of further increases as hinted by Vlieghe. Inflation remains stubbornly high; something will have to be done to temper a consumer lending surge growing at 10% a year.

Households might cope with a move to 0.5%, but if a rate increase augurs a sustained move against cheap borrowing and persistent inflation, then a wider rethink of ambitions, from getting further up the housing ladder to buying a new car, will be needed. And for those not on the housing ladder, hopes of a step up could be extinguished altogether.

Disney hopes its Star Wars choice will use the force wisely

Disneys choice of creative talent in recent years has been impeccable, having handed the Avengers franchise to Joss Whedon and employed Lin-Manuel Miranda to co-write the music for Moana. But its decisions over the Star Wars universe have unravelled of late.

The director of Rogue One, Gareth Edwards, was sidelined during reshoots, while the directing duo behind the new Han Solo film, Phil Lord and Christopher Miller, were fired altogether shortly before shooting finished. Most recently, Jurassic World helmer Colin Trevorrow was yanked off the final Star Wars instalment before filming began.

Last week, Disney announced it was handing the final film in the latest Star Wars trilogy to JJ Abrams, the creator of Lost and director of The Force Awakens, the film that launched this Jedi triptych. Abrams is a conservative choice, by Disneys recent standards. But what the studio needs right now is a safe pair of hands on the lightsaber.