By
Eric Lam
@ericlamTO More stories by Eric Lam
From

Bitcoin traded at $8,235 as of 11:20 a.m. in Hong Kong, up 12 percent from its low reached over the weekend, according to prices on Bitstamp. Rival coins Ripple and Ether also pared weekend losses. 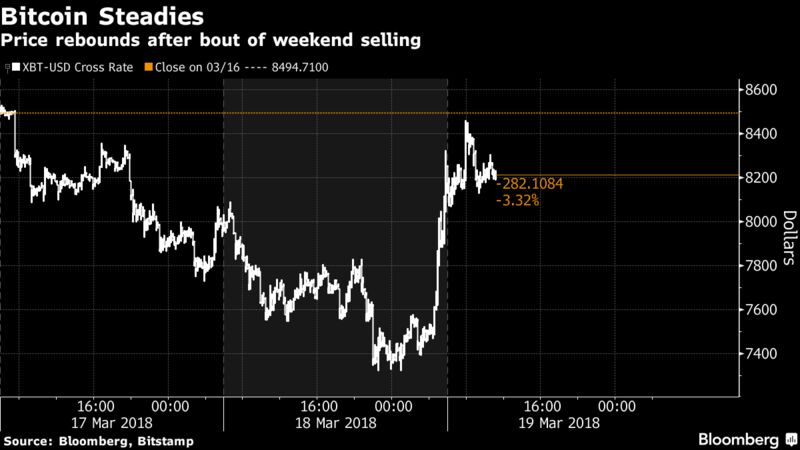 Traders are watching this week’s G-20 meeting for any signs of a coordinated clampdown by regulators, who have been stepping up scrutiny of digital assets in recent months amid concerns ranging from money laundering to tax evasion and fraud. While cryptocurrencies are currently too small an asset class to pose systemic risks to the financial system, that may change as the space continues its rapid evolution, Mark Carney, chairman of the Financial Stability Board, said in a letter to G-20 finance leaders published Sunday.

“The biggest concern the regulators have is just that they don’t want unsuspecting consumers to get caught up in something they’re not familiar with, so they’re always erring on the side of caution,” Stephen Innes, head of trading for Asia Pacific with Oanda Corp., said in a phone interview from Singapore.

In the meantime, individual investors have been looking for opportunities to “buy dips,” Innes said. “I don’t think that mentality is going to pull up any time soon. Right now the guideposts markets are using for support is around $7,500 and $11,000 on the top side.” Eight years since the birth of bitcoin, central banks around the world are increasingly recognizing the potential upsides and downsides of digital currencies. The guardians of…