Bitcoin’s rebound took it briefly above $16,000 on Tuesday as traders of the world’s biggest digital currency sought to draw a line under its roller coaster five-day slump.

The tokens rose to as much as $16,132.09 and were poised for the biggest gain on a closing basis in more than two weeks and the first in six days. It traded higher by 15 percent to $15,860 as of 4:09 p.m. in New York. Rival currencies litecoin and ethereum were up 5.6 percent and 2.5 percent, respectively, according to data compiled by Bloomberg.

High trading volumes at Coinbase, one of the biggest exchanges, forced the company to issue a warning on its website that transactions for bitcoin and ether may be delayed by several hours. 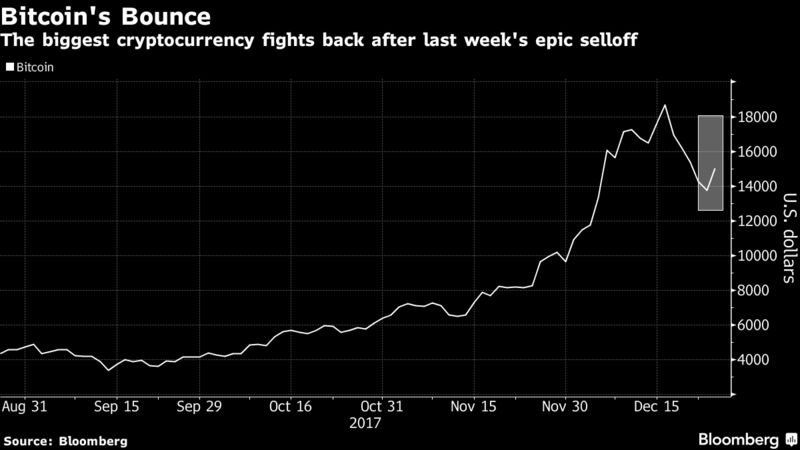 The gains will be a welcome relief for crypto bulls, after bitcoin declined as much as 44 percent after reaching a record in what was seen as a major test for the nascent digital currency industry. The advance suggests that, even as financial authorities issue warnings about the risks of a bubble in the asset class, investor interest remains intact, at least for now.

“The most important question facing it is whether the recent price correction will prove to be what market participants refer to as ‘healthy’,” Mohamed El-Erian wrote in a Bloomberg View column Tuesday. In other words, one that shakes out “excessive irrational exuberance, provides for the entry of institutional investors, encourages the development of market-deepening products, and widens and balances out the investor base and the product offering,” he said.

The answer to that question may determine bitcoin’s future as a debate rages over the sustainability of the rally that’s seen it gain more than 1,500 percent this year. Bulls argue that the nature of the cryptocurrency and the blockchain technology behind it is a game changer for the world of finance, while bears say it has no intrinsic value and price moves display the hallmarks of a speculative asset bubble.

Amid bitcoin’s wild price ride, attention is also increasingly turning to rival digital tokens. Since the largest cryptocurrency hit a record $19,511 on Dec. 18, it has actually underperformed peers such as ripple and ethereum. 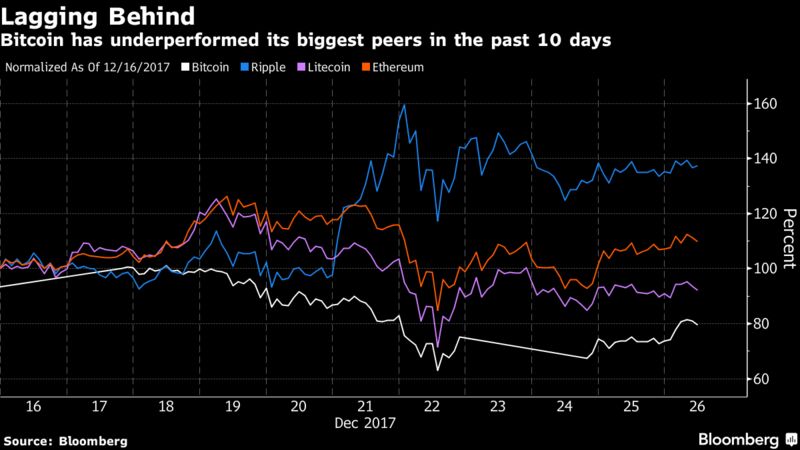 Bitcoin is the crypto benchmark, but not the best representation of the technology, Mike McGlone, Bloomberg Intelligence analyst, wrote in a column on Sunday. A proper focus for institutional investors is likely the broader market, including “forks” and second-generation — or 2G — offshoots that address bitcoin’s flaws, he said.

When the frenzy subsides, 2Gs should continue to gain on bitcoin, according to McGlone. “Ethereum appears prime to assume benchmark status, though bitcoin forks ripple and litecoin are the primary up-and-coming contenders,” he said.