Bitcoin appeared to find a bottom Friday, rebounding above $14,000 after moves by South Korea to curb speculation and protect retail customers sent the cryptocurrency sliding yesterday.

The digital currency has slumped about 27 percent from its record $19,511 reached on Dec. 18, when CME Group Inc. introduced its futures contract. While bitcoin’s debut on regulated derivatives exchanges in Chicago was thought to have given it a new mainstream channel for investors to tap, so far trading volume has been limited.

For more about cryptocurrencies, see the following:
Move Over Bitcoin, New Blockchain Applications Are 2018’s Story
Bitcoin’s Store of Value Is Eroded by Its Digital Rivals: Gadfly
Get Set for Petro, Venezuela’s Cryptocurrency Answer to Bitcoin
Bitcoin the New Mattress Full of Cash for Divorce Cheats 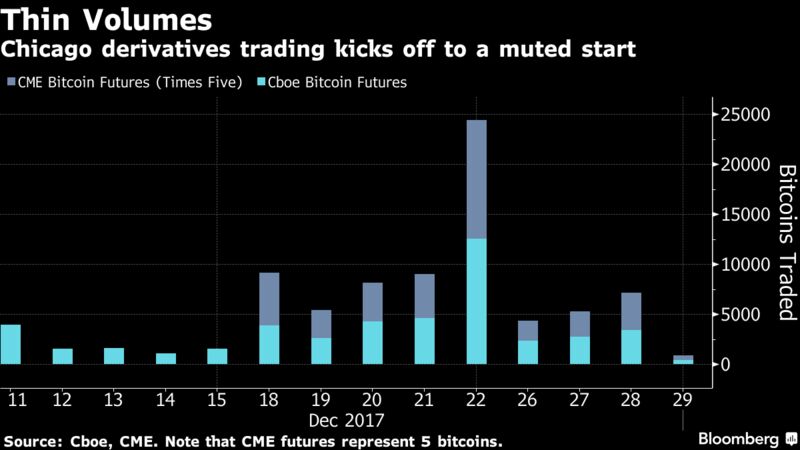 "Short-term support is about $13,500 — we’ve hit that the last couple of trading sessions," Chris Gersch, director of strategy at alternative investment management firm Bell Curve Capital LP in Chicago, said on Bloomberg Television. "Ultimately I think it moves lower and tests last week’s lows around $12,400 in the futures contract," he said, referring to the CME version.

The South Korean government has been among the loudest voices of concern about a possible speculative bubble in the largest cryptocurrency, which is still up about 1,500 percent for the year. The country is something of a bellwether for global demand, with South Koreans paying premiums about 20 percent over prevailing international rates as of Friday.

For a menu of cryptocurrencies on the Bloomberg, see:
VCCY The allure of bitcoin was too much for CME Group Inc. The world’s largest exchange owner reversed course today and said it plans to introduce… Bitcoin resumed its slide Thursday, dipping below $14,000 as the cryptocurrency’s dizzying drop from a record set 10 days ago intensified. The latest blow to…