Bitcoin Heads to Wall Street Whether Regulators Are Ready or Not

You are here: Home / digital currency / Bitcoin Heads to Wall Street Whether Regulators Are Ready or Not

Two U.S. exchanges, including the parent of the venerable Chicago Mercantile Exchange, are racing to embrace bitcoin, dragging federal regulators into a realm skeptics call a fad and fraud.

The development shows how some big financial players are moving to co-opt the volatile cryptocurrency and lure more mainstream investors into the market, even before regulators have agreed on just what bitcoin is.

CME Group Inc.’s contracts will debut Dec. 18. Cboe Global Markets Inc. didn’t announce a start date. Both got the green light Friday after going through a process called self-certification — a pledge to the U.S. Commodity Futures Trading Commission that the products don’t run afoul of the law. The news pushed bitcoin’s price higher. 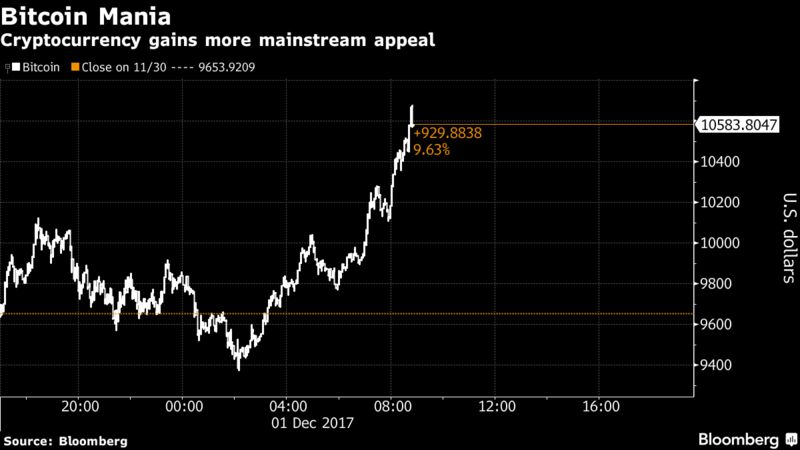 The moves are a watershed for Wall Street professionals – including institutional investors and high-speed traders — who’ve been eager to bet on cryptocurrencies and their wild swings, but worried about doing so on mostly unregulated markets. The new products are subject to CFTC oversight. CME, Cboe and Cantor Fitzgerald LP’s Cantor Exchange — which is creating another kind of bitcoin derivative, binary options — promised to help the agency surveil the underlying bitcoin market.

“Bitcoin, a virtual currency, is a commodity unlike any the commission has dealt with in the past,” CFTC Chairman Chris Giancarlo said in a statement Friday. “We expect that the futures exchanges, through information sharing agreements, will be monitoring the trading activity on the relevant cash platforms.”

Read More: Bitcoin Futures Get Push Back, Not Stop Light From Watchdogs

Trading in bitcoin and other cryptocurrencies is largely unregulated, and that’s the point. Bitcoin was introduced in the wake of the 2008 financial crisis as a way of avoiding governments and central banks. Now with its meteoric rise and the proliferation of cryptocurrencies, banks, brokers and mainstream investors want in. And they want regulation, something they’ll get plenty of in a market like CME or Cboe’s.

“The launch of the futures will actually make the market healthier,” Cboe President Chris Concannon said in an interview after the news broke Friday. “It will create pricing equilibrium in the market. Clients who are holding bitcoin now have no way to hedge their risk. These products allow them to hedge, and to take opposing views. More importantly, it brings a wave of regulatory oversight.”

U.S. financial regulators have struggled for years to agree on what, exactly, bitcoin is and what risks it might pose. That’s left its enthusiasts and financial professionals unsure which government agencies might try to police the rapidly growing market. In addition to the CFTC, there’s the Securities and Exchange Commission, the Internal Revenue Service and the Treasury Department’s FinCEN, which tracks illicit payments.

The CFTC declared in 2015 that it would treat bitcoin as a commodity. “But the IRS says it’s property, the SEC said now some digital currency is a security, and FinCEN says digital currency is a ‘money-like instrument,’” said Adam White, general manager of GDAX, a cryptocurrency exchange owned by Coinbase. His company is trying to work with all of them, he said, while offering his own definition: “It’s a new asset class.”

After Friday’s announcement, exchanges and the CFTC will have to keep tabs on that underlying market, according to Jeff Bandman, who until June advised Chairman Giancarlo on financial technology issues.

“It’s well understood that bad actors can take actions in the spot market for a commodity where the reward or payoff is the derivatives market and vice versa,” Bandman, who now runs Bandman Advisors, said in an interview before Friday’s announcement. “This would represent a new opportunity for mischief.”

There are other ways the new futures could spur more vigorous oversight of the cryptocurrency. The contracts, for example, could make it easier to create an exchange-traded fund tied to bitcoin — even after a previous attempt was knocked down.

That could enlist the SEC. In March, the agency rejected a bitcoin ETF proposed by Tyler and Cameron Winklevoss — the co-creators of the Gemini exchange — saying necessary surveillance-sharing agreements were too difficult given that “significant markets for bitcoin are unregulated.” Cboe is basing its futures on prices from Gemini.

Many mainstream investors and their brokers — lured by bitcoin’s meteoric rise this year — wouldn’t mind some government oversight to head off potential abuses. But regulating these futures only works so well if the underlying market isn’t safe.

“The problem with the futures contracts is they are regulated derivatives that are based off underlying trading in unregulated markets,” Richard Johnson, a market-structure analyst at Greenwich Associates who specializes in blockchain, said before Friday’s announcement. “That does create a potential problem.”

Ever since digital currencies began emerging, U.S. regulators have faced a big dilemma: The laws that empower watchdogs and delineate their areas of responsibility were written decades ago when money was minted on paper, companies turned mainly to the stock market for capital, and commodities came from farms, mines or wells. Many authorities have held back, studying what to do.

CME Chief Executive Officer Terrence Duffy sped up that process in October when he disclosed his plan for futures. His announcement of an imminent product caught some CFTC officials by surprise, according to three people with knowledge of the matter.

The problem among regulators is that they each have roles with bitcoin, but that there’s too little coordination, said Justin Slaughter, a former top aide to a CFTC commissioner who now consults on financial technology and regulation as a partner at Mercury Strategies.

“It’s been very scattershot, it’s been somewhat confused,” he said.