Bitcoin blew past $9,700 just a week after topping $8,000 and approached its closest ever to five figures, gaining mainstream market attention as it defies bubble warnings.

The biggest price jump since August consolidated during Japanese trading hours and vaulted the largest cryptocurrency’s value in circulation above the market caps of all but about 30 of the S&P 500 index members. The increase also buoyed its 10-day volatility to more than 15 times the level of the euro-dollar, the most traded currency pair.

“The more we hear about forks, it starts to fly higher again,” said Craig Erlam, senior market analyst in London at Oanda, said by telephone referring to persistent speculation that a split — or fork in industry parlance — may be in the offing. “It’s extremely difficult to determine a fair value for bitcoin. And there’s no news of substance on the regulatory front.” 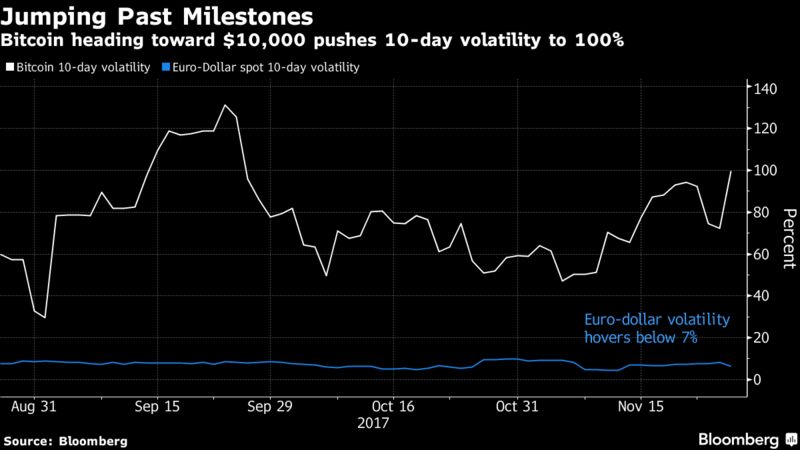 Bitcoin’s ascent has stirred reflection by traditional market participants and fanned speculation of a potential bubble. From Wall Street executives to venture capitalists, observers have weighed in as bitcoin has risen about 45 percent over the past two weeks. By comparison, it took the S&P 500 Index since February 2014 to achieve a similar increase.

The surge has swept along individual investors. The number of accounts at Coinbase, one of the largest platforms for trading bitcoin and rival ethereum, has almost tripled to 13 million in the past year, according to Bespoke Investment Group LLC.

For more on the forks and fights behind bitcoin’s turbulence, click here for a QuickTake

“The weekend’s bitcoin price hike is just the continuation of a long-term bull run on the cryptocurrency, fueled by the tsunami of speculative trading on Japanese exchanges and the entrance of institutional investors across the world,” said Thomas Glucksmann, Hong Kong-based head of marketing at cryptocurrency exchange Gatecoin Ltd. “It is more likely that the $10,000 psychological stratosphere will push more institutional investors into the mix.”

The pace of appreciation has made it difficult for bullish analysts and investors to keep their predictions up to date.

Hedge fund manager Mike Novogratz, who is starting a $500 million fund to invest in cryptocurrencies, said last week that bitcoin would end the year at $10,000. A day later, Fundstrat head of research Thomas Lee doubled his price target to $11,500 by the middle of 2018.

In a move toward mainstream investing, CME Group Inc. has said it plans to start offering futures contracts for bitcoin, which could begin trading in December. JPMorgan Chase & Co., the largest U.S. bank, was weighing last week whether to help clients bet on bitcoin via the proposed futures contracts, according to a person with knowledge of the situation.

Bitcoin’s surge in value is forcing Wall Street banks to balance clients’ interest in speculating on the cryptocurrency with executives’ skepticism about its future. JPMorgan Chase & Co. Chief Executive Officer Jamie Dimon has been one of bitcoin’s most prominent detractors, calling it a fraud and deriding buyers as “stupid,” while his finance chief, Marianne Lake, has struck a more measured tone. The firm is “open minded” to the potential uses for digital currencies so long as they are properly regulated, she said last month.

The total market cap of digital currencies now sits north of $300 billion, according to data on Coinmarketcap.com’s website.