The intersection of digital money and traditional finance is at 400 South LaSalle Street in Chicago this weekend. That’s where trading in bitcoin futures opens Sunday evening, as the first major U.S. exchange offers a product pegged to the wildly fluctuating cryptocurrency.

The currency has risen more than 1,500 percent this year, and about 85 percent just in the past two weeks, driven largely by demand from individual investors. But even as bitcoin — launched in 2009 as an alternative to banks — divides Wall Street executives and central bankers worldwide, those kinds of gains are a powerful magnet.

The futures offered by Cboe Global Markets Inc., and similar contracts that start trading in a week at at another Chicago-based exchange, CME Group Inc., may open the door to greater inflows of institutional money, while also making it easier to bet on bitcoin’s decline. Either way, it’s likely trading will start slowly, said Mike Novogratz, chief executive officer of Galaxy Investment Partners, which is raising a crypto hedge fund targeted at $500 million.

“If people have expectations that it’s going to have huge liquidity on day one, they’re just wrong,” Novogratz said Thursday in Toronto. “It’s going to take a while to build liquidity. People need to go through at least one cycle to figure out how it settles.” 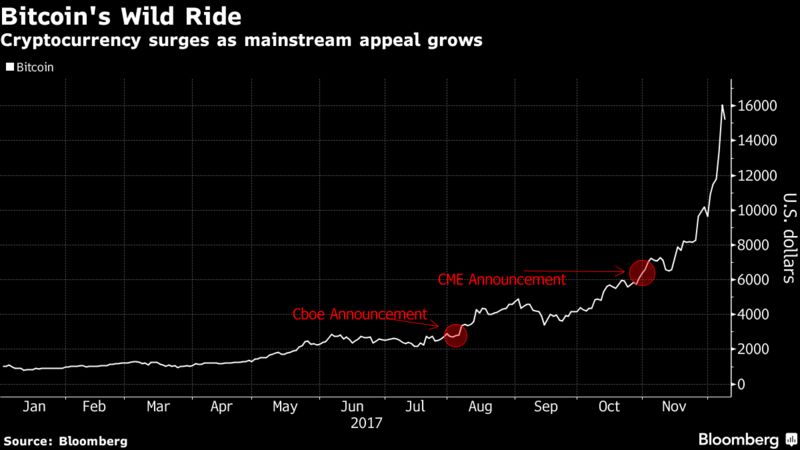 Derivatives trading is the culmination of a wild year for bitcoin, which captured imaginations and investment around the world, propelled by its stratospheric gains, and its anti-establishment mission as a currency without the backing of a government or a central bank, and a payment system without a reliance on banks. The derivatives contracts should thrust bitcoin more squarely into the realm of regulators, banks and institutional investors. In addition to the contracts at Cboe and CME, which will start trading Dec. 18, Cantor Fitzgerald LP won approval from regulators to trade binary options, and LedgerX, a startup exchange, already trades bitcoin options.

“There will be a ramp-up time,” said Ari Paul, chief investment officer of Blocktower Capital Advisors LP. “There just isn’t a rush. The professional traders will mostly be looking to do arbitrage, between the futures and bitcoin itself. I don’t expect massive money flows right away but then I expect gradual buying from people who want passive exposure” without buying bitcoin directly.

QuickTake: All about bitcoin, blockchain and the crypto world

The two exchanges on Dec. 1 got permission to offer the contracts after pledging to the U.S. Commodity Futures Trading Commission that the products don’t run afoul of the law, in a process called self-certification.

“Derivatives should have the effect of bringing a deeper liquidity to the market which should reduce volatility,” said Alistair Milne, chief investment officer and co-founder of Altana Digital Currency Fund that is based in Monaco. “As the whole cryptocurrency economy gets bigger the volatility should reduce.”

But not everyone is convinced it’s a good idea. On Dec. 6, the Futures Industry Association — a group of major banks, brokers and traders — said the contracts were rushed without enough consideration of the risks. Last month, Thomas Peterffy, the billionaire chairman of Interactive Brokers Group Inc., wrote an open letter to CFTC Chairman J. Christopher Giancarlo, arguing that bitcoin’s large price swings mean its futures contracts shouldn’t be allowed on platforms that clear other derivatives.

Still, Interactive Brokers will offer its customers access to the futures, though with greater restrictions. They won’t be able to go short — betting that prices will decline — and Interactive’s margin requirement, or how much investors have to set aside as collateral, will be at least 50 percent. That’s higher than either Cboe’s or CME’s margin requirements.

Cboe’s futures are cash-settled and based on the Gemini auction price for bitcoin in U.S. dollars. The exchange plans to impose trading limits to curb volatility, halting trading for two minutes if prices rise or fall 10 percent, and a five-minute halt kicks in at 20 percent. Margins for Cboe bitcoin futures, which will be cleared by Options Clearing Corp., will be at 40 percent or higher.

Cboe’s futures market is a niche player in derivatives trading, which could limit how many contracts change hands in the initial days. Fueled by contracts on the VIX, the Cboe Futures Exchange handled 56 million contracts during the first three quarters of 2017, according to data compiled by the Futures Industry Association, the industry’s trade and lobbying group. CME traded 3.1 billion contracts in the same period.

Some traders also will prefer CME contracts over Cboe’s because they’re based off four exchanges, instead of just one, reducing risk of disruptions because of outages, attacks or price manipulations.

The smaller Cboe does have an advantage over CME Group, however, because it’s a major player in stock and equity options trading, giving it access to broker-dealers and investors who may not trade on CME.