Bitcoin Dives After SEC Says Crypto Platforms Must Be Registered

Bitcoin slumped back below $10,000 after the U.S. Securities and Exchange Commission reiterated that many online trading platforms for digital assets should register with the agency as exchanges.

The largest cryptocurrency dropped as much as 13 percent to $9,416 after the SEC statement boosted concern that tightening regulation may limit trading. Bitcoin is down about 50 percent from its high of almost $20,000 in December in part because regulators worldwide have clamped down on trading, mining and initial coin offerings. Adding to concern is speculation that Asia-based Binance, one of the largest exchanges, has been hacked. 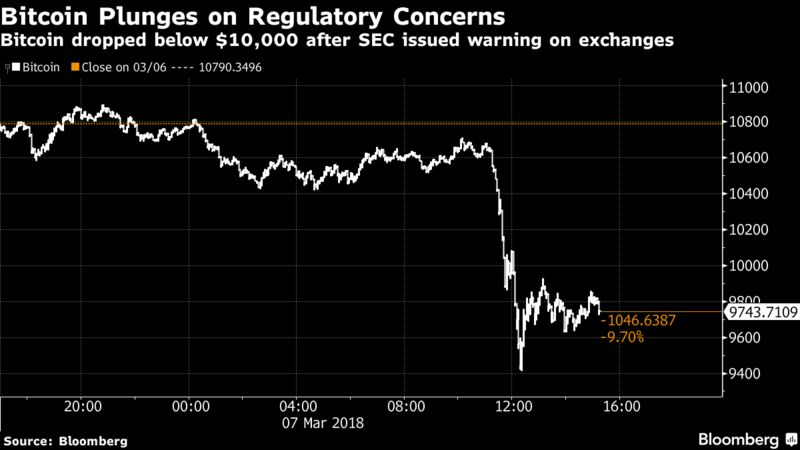 “If a platform offers trading of digital assets that are securities and operates as an ‘exchange,’ as defined by the federal securities laws, then the platform must register with the SEC as a national securities exchange or be exempt from registration,” the SEC said in the statement Wednesday.

Some of the largest cryptocurrency trading platforms, like Coinbase Inc.’s  GDAX, aren’t registered as a exchange with the SEC, and instead have money transmission licenses with separate states. In the case of Gemini, it’s regulated by the New York State Department of Financial Services as a trust company, according to its website. Templum LLC is an affiliate to Liquid M Capital, which is registered as an alternative trading system with the SEC. Overstock.com Inc.’s tZero says it aims to be a fully-compliant trading platform.

Many platforms are referring to themselves as “exchanges,” which can give the “misimpression” to investors that they are regulated or meet the regulatory standards of a national securities exchange, the SEC said in its statement, warning that it doesn’t review the trading protocols used by these platforms and that access to a platform’s trading services may not be the same for all users.

Read More: SEC Is Said to Issue Subpoenas in Hunt for Fraudulent ICOs

The SEC statement was issued by its trading and markets unit and its enforcement division, which investigates misconduct and fines firms for violating securities rules. The enforcement division’s involvement shows the potential pitfalls for digital-coin platforms that don’t heed the SEC’s warning to register with the agency: they could be sued and shut down.

Exchanges that register with the agency have a high compliance burden, including being subject to inspections. They are also required to police their markets and follow SEC rules designed to ensure fair trading.

Users of Binance complained online that their accounts got hacked. Binance users on social networks Reddit and Twitter said hackers sold their smaller coins and bought a cryptocurrency called Viacoin, which is up 28 percent today, according to CoinMarketCap.

A QuickTake explainer on regulators’ crypto-crackdown

“All funds are safe,” wrote Zhao Changpeng, chief executive officer of Binance, in a tweet Wednesday. “There were irregularities in trading activity, automatic alarms triggered. Some accounts may have been compromised by phishing from before. We are still investigating.”

Quotes from this Article