Bitcoin’s terrible start to 2018 is highlighting the appeal of cryptocurrency hedge funds that make money in both bull and bear markets.

Pivot Digital Trading-2, managed by Hong Kong-based Amber AI Group, generated some of the biggest gains among cryptocurrency funds that avoid directional bets. It rose 4.3 percent in March to bring its first-quarter return to 30 percent, according to the firm. Market Neutral Liquidity SP-Institutional, domiciled in the Cayman Islands, earned 5.6 percent in the first quarter, said Cedric Jeanson of BitSpread Group, investment adviser to the portfolio.

The results suggest some managers are finding ways to profit from wild swings in cryptocurrencies without having to predict whether the coins will rise or fall. Such tactics may appeal to investors who want exposure to digital assets without their extreme volatility. 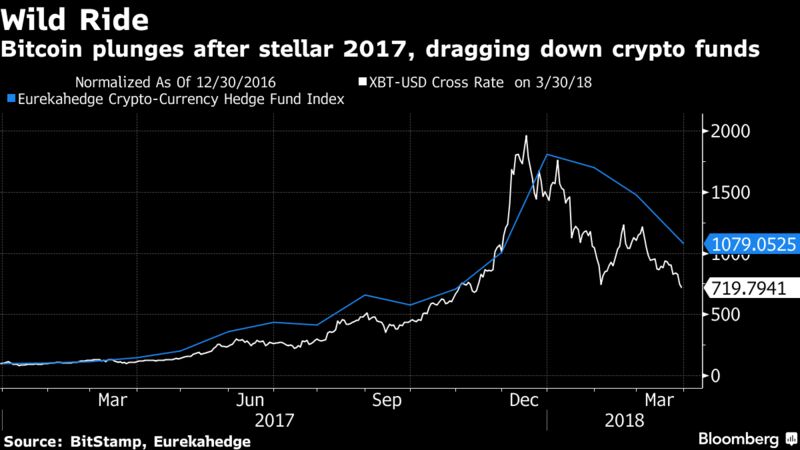 As a group, cryptocurrency hedge funds are still highly correlated to the market. A Eurekahedge index for the category posted its biggest three-month slump on record last quarter as Bitcoin sank more than 50 percent. The index soared 1,709 percent in 2017, when Bitcoin jumped about 1,400 percent.

Among funds that lost money was Silver 8 Partners. It dropped 25 percent in March and 32 percent in the first quarter, according to a commentary sent to investors. Silver 8 invests in digital assets, along with fintech, blockchain and machine learning companies.

"High levels of uncertainty and low market liquidity make investments in blockchain-related assets volatile," the firm said in a newsletter. "They tend to overreact to cycles of euphoria and pessimism, where the market price itself acts as a catalyst for further momentum."

While funds from Amber AI and BitSpread tend to not post such high returns during boom times, they provide investors with some protection when prices of digital assets fall.

PDT2, as the Amber AI fund is otherwise known, trades the 25 largest digital currencies on exchanges including Huobi, OKEX, Bitfinex, Binance, Kraken and BitStamp, said Tiantian Kullander, one of the four former Morgan Stanley traders who started the firm with a one-time programmer at Bloomberg LP, the parent of Bloomberg News.

Market Neutral Liquidity SP-Institutional, with more than $100 million of assets under management, makes markets for currencies such as Bitcoin, Ethereum and Ripple, BitSpread’s Jeanson said.